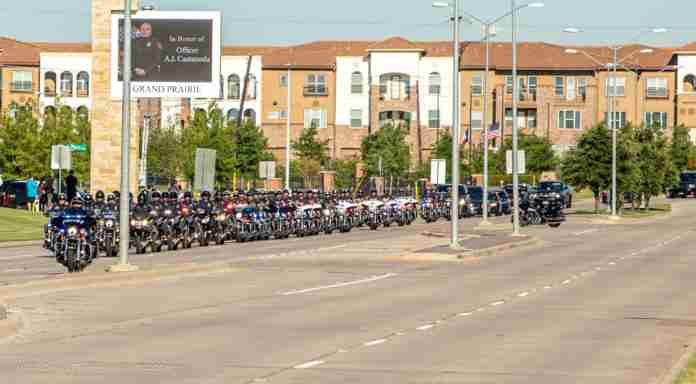 Mourners gathered Thursday morning at a The Potter’s House to honor a Grand Prairie police officer described as a “model officer” by colleagues and a “genuine hero” by those who knew him.

Albert Ramirez “A.J.” Castaneda, a Grand Prairie native, served eight years in the U.S. Coast Guard and six as a Tarrant County Sheriff’s Office deputy, but always imagined coming home, according to fellow officers and family members. He got his chance in January 2014, when he graduated from the academy and joined the patrol division.

Family, friends and law enforcement officials from across Texas gathered to pay their respects for Officer A.J. Castaneda. Officer Castaneda was using radar to look for speeders on the President George Bush Turnpike when police said a 17-year-old driver lost control and hit him.

A.J. was born on April 27, 1981, in Grand Prairie to Albert Castaneda Sr. and Patricia Fay Bridges Castaneda. He was raised in Grand Prairie and baptized in the Tolar Church of Christ. A.J. graduated from Tolar High School as the Salutatorian of his graduating class and The University of Houston on the Dean’s List. He worked as a Grand Prairie Police Officer for the past 5 years. Prior to that, he worked for 6 years for the Tarrant County Sherriff’s Office and served for 8 years with the U.S. Coast Guard.

Memorials: Donations may be made to the Grand Prairie Police Association, https://grandprairie.firstresponderprocessing.com/